Europe badly trails Asia in its ability to make battery cells for electric cars. The region is hoping $3.5 billion in seed money will help it catch up.
#facilities #Volvo #Daimler

Europe badly trails Asia in its ability to make battery cells for electric cars. The region is hoping €3.2 billion ($3.5 billion) in seed money will help it catch up.

The stakes are huge. BMW, Daimler and Volvo alone say expect to spend some €80 billion ($88 billion) to buy batteries to power millions of locally produced EVs in the coming decade.

It’s All About Cells

Most of the cells used to make those batteries come from suppliers based in China and South Korea. Lately it has dawned on Europe that creating local cell-making capacity is a looming economic priority. 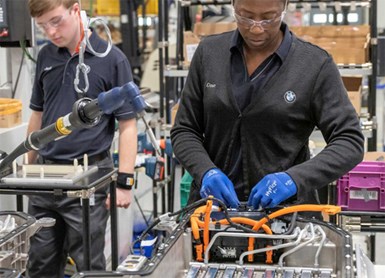 Electrification is a very big deal among European car companies. They had been banking on diesels to help them meet future emission limits. But that strategy went out the window in 2015, when Volkswagen admitted it had doctored 11 million diesel cars to cheat on emission tests.

Too Little, Too Late?

The commission’s plan, first sketched out two years ago, will involve 17 direct participants and more than 70 indirect companies and research groups. They will pursue new materials for batteries, work on cell and module designs, develop entire batteries and the software to manage them, and delve into recycling issues.

But the effort may be too late. At least five Asian battery makers are moving ahead with plans to open their own cell and battery factories in Europe within the next few years.