Mercedes is pushing back the launch of its electric-powered EQC to early 2021, one year later than previously planned.
#BMW #Tesla #Ford

It was a big deal when Mercedes debuted its first electric vehicle—the EQC compact crossover—in Europe this summer. Its EV is so popular there, in fact, that it won’t get to the U.S. until 2021, a year later than planned. 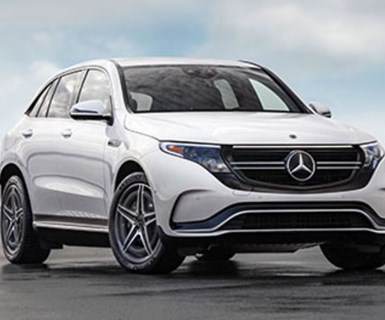 Mercedes calls it a “strategic decision.” U.S. dealers are thinking more “strategic blunder,” since it means they’ll wait another year before they can compete with EVs already on sale here from Audi, Jaguar and, of course, market leader Tesla. BMW will jump in next year with the all-electric iX3 small crossover vehicle.

It’s All About the Regs

Mercedes isn’t alone in giving other markets preferential treatment for EV rollouts. Kia is delaying the U.S. launch of the electric variant of its Soul, which bowed elsewhere this year, to at least 2021. And Ford is said to be allocating as much as 60% of the first-year production of its upcoming Mustang Mach-E production to Europe.

Automakers don’t have much of a choice if they want to meet strict emissions regulations in Europe. Electrifying their lineup there is a no-brainer.

But the U.S. is another story, where consumer interest for EVs is spectacularly tepid. Plus, the Trump administration is poised to roll back aggressively tougher pollution limits for cars currently set to phase in in 2021-2025. That means there’s little reason for carmakers to push EVs in the American market.

For all the ballyhoo, electrics amount to a microscopic 1% of the global passenger vehicle market, with 60% of that total coming from China. The vast majority of would-be car buyers remain skeptical of EVs for their high cost, limited range, tedious charging times and general lack of convenient charging stations.

But don’t write off EVs quite yet. Carmakers are pumping up EV choices with everything from ultra-luxury and performance models to tiny city cars. Prices are (slowly) coming down. Range keeps getting better. Optimists sense a thaw in consumer attitudes.

For its part, Mercedes plans to introduce 10 EVs under its EQ sub-brand in coming years, starting with the EQC. It hails the program as “an innovative new direction.” To what extent this includes the U.S. remains to be seen.