COVID-19 has wreaked havoc on the European Union’s auto industry. Year-over-year sales were off 49% in the region during the second quarter and continued to fall, albeit at a lesser rate, in July and August.

But it wasn’t all bad news. In fact, deliveries of electric vehicles and plug-in hybrids (PHEVs) are up considerably from 2019 levels.

During the second quarter, registrations of electrically chargeable vehicles jumped 53% from the previous year, according to the industry trade group ACEA. As a result, the combined market share of such vehicles tripled to 7.2% of the market for the period. 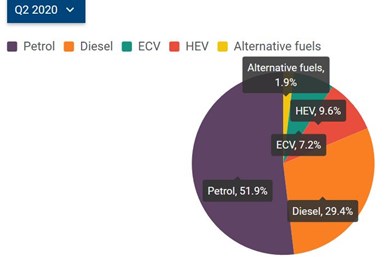 The bulk of the gain came from PHEVs, which saw a 134% hike to more than 66,000 units in April-June. Deliveries of full EVs were up nearly 13% to 63,200 units during the period, with France and Germany leading the way.

Sales of standard hybrid-electric vehicles in the EU fell 7% in Q2 from like-2019. But they still gained share in the down market and now account for nearly 10% of sales in the region.

Traditional piston-powered vehicles still command more than 80% of EU deliveries. But sales of diesel- (-53%) and gasoline-fueled (-55%) models both fell by more than half through June, ACEA says. Diesels now account for just 29% of the overall market, compared with more than 50% a few years ago.

Sales of passenger cars running on alternative fuels (E85 ethanol, natural gas and liquid petroleum gas) also were down 50% year-over-year in Q2. The decline was mainly attributed to a falloff in Italy, which is the largest market for such vehicles.