Europe’s car sales have sagged because of the coronavirus pandemic. But demand for electrified vehicles are up sharply.

It’s a sliver of good news in an overall new-car market that shrank 26% in the first quarter, trade group ACEA reports. 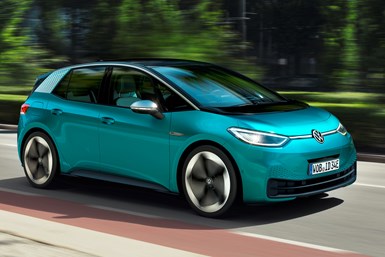 European demand in January-March for all types of electrified cars—hybrids, plug-in hybrids, all-battery and fuel cells—soared 61% to 538,500 units. That was enough to double the market share for such vehicles to a record 18%.

Three in four of those cars—408,200 to be exact—are regular hybrids or plug-in hybrids. The remaining 25%, or 130,300 cars, are powered exclusively by batteries.

It’s the latter type of vehicle that Europe’s carmakers are pushing especially hard. That’s because they need the zero output of carbon dioxide from such vehicles in their sales mix to meet the region’s tightening CO2 targets.

ACEA says first-quarter sales of pure electrics jumped 58% to 130,300 units. That’s only 4% of this year’s warped European new-car market. But it’s also nearly twice the share for such models in the same period last year.

ACEA says first-quarter sales of pure electrics jumped 58% to 130,300 units. That’s only 4% of this year’s distorted European new-car market. But it’s also nearly twice the share for such models in the same period last year. Germany and France, each with first-quarter sales of 26,000 pure electrics, led the market.

All this comes as European demand for diesels has skidded to 30% from more than 50% five years ago, when the Volkswagen diesel emission cheating scandal began.

Electrified vehicles are doing very well in a European market warped by the coronavirus pandemic. They aren’t likely to retain their market share when overall sales revive later this year. But gains in unit volume seem sure to continue.