Europe’s Car Plants at 50% of Capacity

Europe’s auto production is back online but running slowly.

Even though 90% of the region’s 180 light vehicle and engine plants are open again, their combined output is only about half of capacity, according to LMC Automotive. 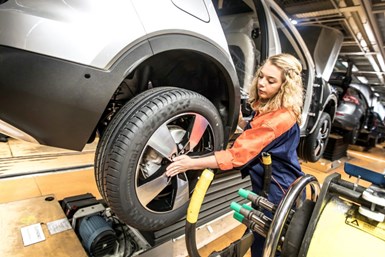 Plant-by-plant production varies widely as companies grapple with the challenges of keeping workers safe during the COVID-19 crisis and matching actual output to uncertain market demand.

Year-on-year retail car sales across Europe plummeted 52% in March, 78% in April and 57% in May as the pandemic swept through, according to trade group ACEA.

Deliveries last year advanced 1%, thanks to a sales surge in December. But it’s been downhill since then, in keeping of analysts’ predictions that Europe was overdue for shrinkage following years of expanding volumes.

Sure enough, ACEA reported that retail sales fell 7% in January and February, before the coronavirus forced a wave of plant lockdowns. At its peak, the closures idled some 1.1 million auto workers—more than half of them in Germany, according to ACEA data.

Now, many European dealers are more interested in selling down their inventories than placing hefty orders for more vehicles.

Most reopened plants are running one or two shifts rather than three and don’t expect to resume normal output for at least another month or two.

One exception is Volvo’s plant in Ghent, Belgium, which reopened with one shift on April 20. The company says the facility is currently running three shifts that produce a combined 1,000 of the company’s V40 compact sedans and XC60 crossover vehicles per day.

Europe’s rebound is off to a notably slower start than the paces we’ve seen in China and the U.S.