A surge in demand for electrified vehicles in Europe is helping some, but not all, carmakers cut carbon dioxide emissions from their fleets.

Sales of hybrids and all-electric vehicles tripled in the first half of 2020, capturing a record 8% of Europe’s passenger vehicle market, says Transport & Environment. The activist research group’s new analysis, Mission (almost) Accomplished, says electrics are on track to increase their European share to 10% by year-end and 15% in 2021. 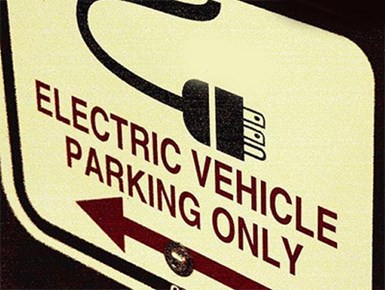 EV sales have been surprisingly strong in Europe and China, even as demand for piston-powered cars slumps during the continuing COVID-19 pandemic.

The Squeeze Is On

Until this year, carmakers faced a 130 g/km cap on CO2 emission from their new vehicles. With an industrywide average of 122 g/km in 2019, they were comfortably below that level. But the average has been creeping up instead of going down because of booming SUV sales.

Some carmakers, notably Fiat Chrysler Automobiles and Toyota, have been keeping up by paying better-performers a fee for the ability to pool the CO2 output of their cars. FCA did this with Tesla, and Toyota with Mazda, last year.

New European Commission rules say manufacturers must now slash that average to 95 g/km by the end of next year. If the industry fails to get there in time, its members could face a worst-case scenario of roughly €30 billion ($35 billion) in fines, according to U.K.-based data researcher firm Jato Dynamics.

T&E calculates that deliveries of electrified cars in the first half of 2020 lowered overall CO2 emissions among new vehicles in Europe by a record 9% to 111 grams per kilometer. That’s the largest drop for the period since the first CO2 regulations went into effect in 2008. 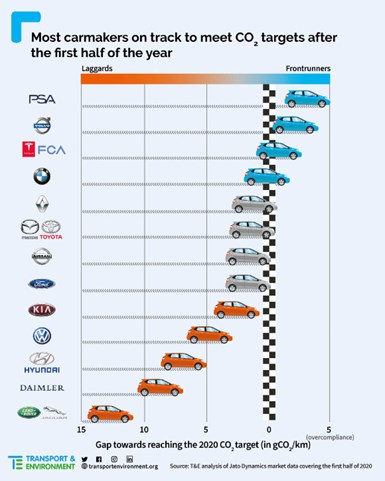 Most carmakers are on a trajectory to meet the 95-gram target, but some have work to do. T&E says the front-runners—meaning producers who already are ahead of where they should be by now—are PSA, Volvo, FCA (with help from Tesla) and BMW.

A second group is only about 2 grams short at this point, according to T&E. They are Renault, Toyota (with help from Mazda), Nissan and Ford.

The analysis frets that half of the reduction due from the industry this year will be through regulatory loopholes, such as pooling, rather than actual compliance. But pressure to push EV sales will grow next year as those alternatives are drained.

T&E predicts that demand for electrified vehicles in Europe will grow from about 500,000 in 2019 to 1 million this year and 1.8 million in 2021. But the group concedes that all forecasting comes with a considerable level of uncertainty these days.

T&E’s 105-page analysis goes into considerable depth on a company-by-company and model-by-model basis to calculate likely EV sales through 2021. It also opines what must be done to maintain growth for the electrified vehicle market. Among its takeaways:

Carmakers in Europe are making good progress toward lowering CO2 emissions. But as T&E points out, there’s more to this than putting the squeeze on piston engines. It’s time for government and regulators to step up.