The deal aims to enable the company to finish development work on its compact Ocean electric crossover vehicle and begin selling the $37,500 car in 2023. 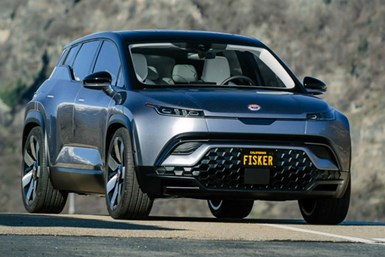 Fisker has been working on the Ocean since the company was launched in its present form in 2016. A final prototype debuted last year and was supposed to go into production in 2021. That date has now been pushed back to late 2022.

Fisker and Spartan Energy aim to complete the deal in the fourth quarter of this year. The plan will give Fisker $1 billion with which to complete development and begin production. The company says it intends to start testing prototypes of what it touts as the “world’s most sustainable vehicle” before year-end.

The Ocean will feature extensive use of recycled materials and a roof with built-in solar panels. Inside, the vehicle will offer a head-up display, video instrument cluster and large center-mounted touchscreen.

About the size of Chevrolet Equinox, the all-wheel-drive Ocean will be propelled by a pair of electric motors that make a combined 300 hp. A zippier version that can accelerate from zero to 60 mph in less than 3 seconds is in the works. 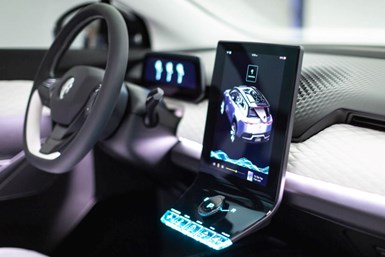 The Ocean’s IP and touchscreen

Fisker estimates the car’s 80-kWh battery will provide a range of 250-300 miles per charge. The company is working with researchers on a next-generation lithium-based chemistry that could boost range to 400 miles.

Further down the road, Fisker hopes to add a high-performance electric sedan and pickup truck.

Company founder Henrik Fisker is no newcomer to the world of automotive startups. The former Aston Martin design chief launched his first company, Fisker Automotive, in 2007 to produce the hybrid Karma $108,000 sport sedan.

Deliveries began in 2011. But the car—a pioneer in hybrid powertrains at the time—was plagued by quality issues, production snags, the bankruptcy of its battery supplier and Hurricane Sandy, which destroyed $35 million worth of unsold Karmas.

By 2013, Fisker was gone from the company, which declared bankruptcy. China’s Wanxiang Group acquired the carmaker’s assets—but not the Fisker name—a year later. Wanxiang has since revived operations under as Karma Automotive and introduced an updated version of the Karma sedan called the Revero.

Fisker launched his current company, this time focusing on all-electric powered models, in 2016. First up was the flashy, butterfly-doored Fisker EMotion sedan, shown in concept form at CES in 2018. Last January, the more practical, mass-market Ocean debuted as a well-developed concept at CES.

The IPO deal with Spartan Energy is designed to provide Fisker with the financial juice he needs to complete the Ocean and put it on the road. It’s his best chance yet to successfully join the fray of EV contenders.