He is expected to plead guilty when he returns to federal court on June 3. He faces as many as five years in prison for each of the two charges. 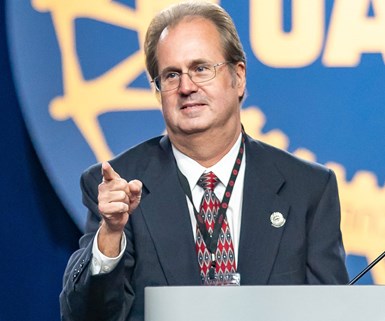 Jones’ arraignment is the latest step—but not the last—in a federal investigation into UAW wrongdoing that began nearly four years ago and has led to 13 guilty pleas to date.

The probe began by looking into a misuse of funds intended for a joint UAW-Fiat Chrysler Automobiles training center outside Detroit.

The Dept. of Justice’s interest widened to include activities by UAW officials involving suppliers to General Motors. Then it swung into the misuse of union funds at the now-disbanded Region 5 office, which had represented the UAW in 17 states.

Jones has been in the crosshairs of the probe for months as Justice Dept. investigators slowly worked their way up the UAW’s executive hierarchy. Jones was charged in March of stealing more than $1 million in union funds while he headed Region 5.

Investigators also are expected to indict Dennis Williams, another former UAW president, who Jones succeeded in 2018.

Depending upon how much further the probe goes, the U.S. could decide to take managerial control of the UAW. Roy Gamble, the current UAW president, has been trying to reform the union fast enough to avoid a takeover since he took over in December.