Winterkorn was forced out by the scandal shortly after it became public five years ago. VW admitted it used illegal software to enable 11 million diesels to grossly exceed pollution limits except when they were being tested for tailpipe emissions. 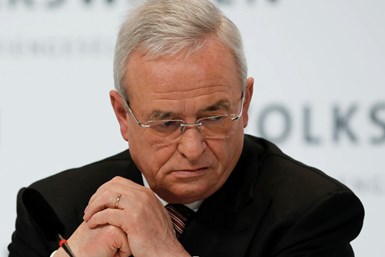 A U.S. grand jury indicted Winterkorn and five other executives two years ago for conspiracy, wire fraud and covering up the cheating concerning VW diesels sold in the U.S., although he cannot be extradited to face the charges.

Prosecutors in Germany charged him and four others—all unidentified ex-VW executives—with fraud in April 2019. The four other past executives face trial for fraud related to tax evasion and illegal advertising.

Winterkorn has steadfastly denied any wrongdoing. But a three-judge panel in Germany says there is a “predominant likelihood” that he will be convicted.

The court panel ruled VW customers who bought the tainted diesels incurred financial loss, because their vehicles lost resale value after the scandal was revealed.

The judges say the fraud charges before their court “concern 9 million vehicles sold in Europe and the U.S.” They estimate the loss to owners at €100 million ($118 million).

The judges indicated they would prosecutors’ requests that all five defendants be ordered to pay back their bonuses to VW. On the other hand, they noted that the group of executives also could be tried for “acting as a criminal gang,” Bloomberg News says.

The scandal to date has cost VW Group some $35 billion in fines, vehicle buybacks and environmental restitution. Most of those payments were in the U.S. and relate to about 555,000 diesels sold in that market.

Winterkorn and others also face charges of stock manipulation in the U.S. and Germany.

Those claims argue that the executives knew about the diesel cheating before it was publicly revealed but failed to promptly notify shareholders.