Ford is laying claim to some key bragging rights with the redesigned F-150 pickup. 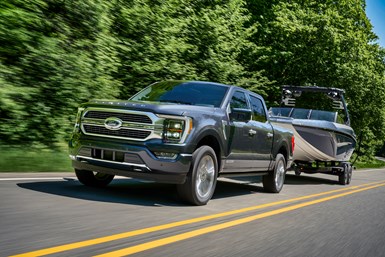 Ford has boosted the output on two of the F-150’s five engine options over those of the outgoing model.

But the most significant performance comes from the all-new hybrid variant. The electrified model teams Ford’s 3.5-liter twin-turbo V-6 engine with a small electric motor that generate a combined 430 hp and 570 lb-ft of torque, which is the most torque ever for an F-150.

A 1.5-kWh battery is mounted under the floor. There also is a standard 2.4-kW generator (enough to power a jackhammer and compact cement mixer) The optional 7.2-kW unit can run 28 refrigerators.

The stand-alone powertrain options include:

All engines are mated with Ford’s 10-speed automatic transmission. Each engine also comes with a mobile generator.