Carsten Breitfeld, who took over as CEO a year ago to revive the struggling company, says he plans to announce a deal “quite soon” with a so-called special-purpose acquisition company. Faraday hopes to raise at least $800 million. 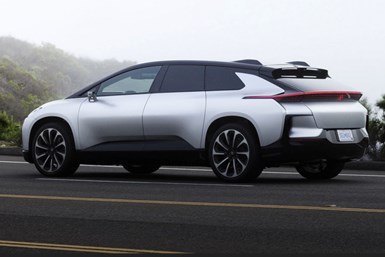 Faraday will be following Canoo, Fisker, Lordstown Motors, Luminar and Nikola, all of whom have announced or completed reverse mergers in recent months. The maneuver is faster and cheaper than a conventional IPO.

Faraday Future had high hopes when it was launched by Chinese internet tycoon Jia Yueting in 2014. The company announced at the end of 2015 it would build a $1 billion factory in Nevada and launch production of its first EV, the FF 91 high-performance luxury crossover vehicle, in 2017.

It’s been a bumpy road since then. The company soon suspended site work for the plant. By early 2017, it also downsized its initial annual production target from 150,000 vehicles to 10,000, and it slashed its future product lineup from seven models to two. Faraday also pushed back the debut of the FF 91 to 2019.

Even that goal proved elusive. The high-flying Jia conceded in 2017 he was running out of cash, a threat to the foundation of his empire, the LeEco internet company. By mid-year, he had resigned all his positions with LeEco and vowed to focus on getting Faraday properly launched.

Funding was the big hurdle. But in 2018, Jia attracted $2 billion from Chinese billionaire Hui Ka Yang and his Hong Kong-based Evergrande Health Industry Group. Evergrande made an initial $800 million payment—and then balked at going further.

Jia accused Evergrande of blocking other investors even as it tried to steal Faraday’s intellectual property. The Chinese conglomerate denied any wrongdoing, but Jia was keen to get out of the deal.

Last year Jia agreed to give Evergrande a 32% stake in the startup. In return, Evergrande scrapped the original deal, gave Faraday a $225 million bridge loan and allowed the startup to pursue other funding sources.

Jia also filed for bankruptcy in a U.S. court. Faraday announced a vague plan to pay off Jia’s debt. The startup also hired Breitfeld as CEO to kickstart Faraday’s future.

Breitfeld had been making some quick moves of his own. He was among a cadre of executives who ran BMW’s EV program until they quit to join Chinese startup Future Mobility and help launch the company’s Byton EV brand.

Breitfeld soon jumped to another Chinese EV startup, Iconiq Motors. He moved from there to Faraday Future a few months later.

Faraday has been trying for three years to get its first model into production in spite of never-ending financial drama, repeated reality checks about its overheated launch plans and considerable churn in the makeup of its executive team.

The company has shown remarkable tenacity to hang on this long. But now the financial climate—not to mention growing consumer interest in EVs—is providing a warmer climate for revival. Whether Faraday rises to the occasion will become apparent in 2021.