Volvo’s Polestar electric vehicle unit’s first two models, the aptly named 1 and 2, took styling cues from its parent. That’s not surprising. They were penned by Volvo designers at the Swedish carmaker’s design studios.

Future Polestar models promise to stand on their own as the brand moves away from Volvo and crafts its own identity. 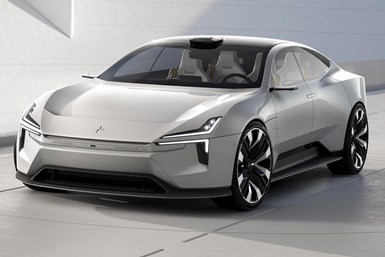 The new Precept concept, a sleek fastback sedan, indicates where Polestar is headed.

The low-slung EV, which sits on a  skateboard chassis with a 122-inch wheelbase, has a sporty stance that Polestar says encapsulates its core values of “pure, progressive and performance.”

In place of a traditional grille, the front end features a “smartzone” that houses a sensor array (two radar units and a high-definition camera) behind a transparent panel to support various driver-assist functions. This is complemented by a lidar pod mounted at the base of the car’s panoramic glass roof, which extends into the rear window.

Rear-facing cameras are used in place of side mirrors to enhance visibility and aerodynamics. The latter also benefits from small integrated wings at the front and rear of the vehicle.

The tailgate has a larger opening and higher-mounted hinges for better access. A distinctive LED bar spans across the rear, with downward brackets. 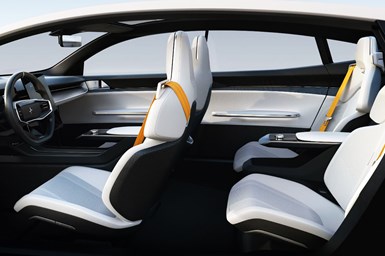 Sustainable materials are at a premium. Flax-based composites are used in the seatbacks and trim panels, which Polestar says cuts weight by 50% and reduces plastic waste by 80%.

Polestar is clear about the Precept’s intent. The car serves as “declaration” and vision of what the brand stands for, asserts CEO Thomas Ingenlath.

He says the concept previews near-term production models that will define the company’s future, including styling, technology and environmental commitment.