French supplier giant Faurecia aims to simplify one of the most tedious driving tasks: parking.

The company’s new valet technology allows users to use a smart phone app to remotely park their car and summon it to pick them up. 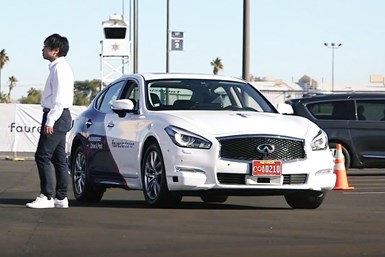 The system uses a variety of onboard sensors to detect available parking spots, then guides the vehicle into place. The technology can maneuver  a vehicle into perpendicular or parallel spaces.

If another vehicle or pedestrian is detected, the system can either stop and wait for the path to clear or maneuver around stationary objects.

Unlike similar technologies being developed by competitors that require parking facilities to be outfitted with supporting sensors, Faurecia’s system is self-contained. It does require a map of the parking lot, but this can be generated in real-time by the vehicle on a single pass around a facility, according to the supplier.

Clarion didn’t provide a commercialization timeline. But the company claims the technology is fully tested and production ready.

It better be. Tesla was faulted last year for rushing its Smart Summon feature into vehicles. In a scathing review, Consumer Reports slammed Tesla’s system  as an “experimental feature” that had no obvious consumer benefit.

Faurecia’s technology comes from its new Clarion Electronics business unit, which was created after last year’s acquisition of the Japanese supplier.

The valet function builds on Clarion’s parking-assist system that was launched in the Nissan Leaf in 2017.

The new business unit combines Clarion with Faurecia’s previous acquisitions of Parrot Automotive and Coagent Electronics. The group, which includes nearly 1,700 software engineers, is expected to generate more than $2.2 billion in sales by 2022.