First electrified model to go into production in 2024
#facilities

Fiat Chrysler Automobiles is ready to join Ford in setting up production of electrified vehicles in Canada.

FCA and labor union Unifor reached a tentative three-year agreement on Oct. 14 that covers 9,000 workers in the country. A ratification vote will be held on Sunday. 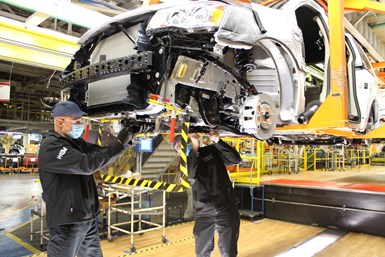 Highlighting the proposed accord is FCA’s pledge to invest US$1 billion in its factory in Windsor, Ont., to make EVs and plug-in hybrid vehicles, according to Unifor President Jerry Dias. He says the plan includes putting at least one new electrified model into production in 2024.

The deal follows Unifor’s pact with Ford last month, under which Ford will spend $1.5 billion to convert its Oakville, Ont., assembly plant into an all-EV factory by 2026.

Dias tells reporters that FCA will set up the Windsor plant to launch a new “multi-energy” platform designed for electrified powertrains. The facility will continue to make conventionally powered Dodge Grand Caravan and Chrysler Pacifica and Voyager minivans.

The new contract is likely to restore Windsor’s third shift, which had been dropped in mid-July. Dias says the new investment will call back more than 400 workers laid off by the cutback and add about 1,500 more.

The agreement also commits FCA to spend $50 million at its assembly plant in Brampton, Ont., which currents builds Chrysler 300 and Dodge Charger and Challenger cars. Dias says FCA will extend the life of the 300 and add three variants to the Dodge models produced there.

Unifor regards the Ford and FCA deals “home runs” for the union, which was worried about attracting new vehicle programs at both companies’ plants.