Fiat Chrysler Automobiles is preparing to form a joint venture with Hon Hai Precision Industry (HPPI) to develop and produce electric cars in China, according to a recent regulatory filing submitted by the Chinese firm.

Under the proposed deal, which is expected to be finalized within a few months, HPPI and several subsidiaries (Foxconn, FIT Hon Teng and FIH Mobile) would be responsible for design, electronics and supply chain management,” Chairman Young Liu tells Bloomberg News. But he says the company has no plans to assemble the cars, which presumably would be FCA’s responsibility.

Foxconn is said to be the world’s largest contract electronics manufacturer. It’s best known for assembling iPhones, which Bloomberg says accounts for half the company’s sales.

That’s impressive, but not necessarily a ringing endorsement to jump into the car business. Wait, there’s more. Dare we say hold the phone?

Partnering with FCA could help HHPI’s auto sales grow to 10% of its business, according to Liu.

Despite HPPI’s lack of experience, it could help FCA fix two serious shortcomings: China and EVs. The automaker lags the industry in both areas. The company has less than a 1% share in China, and its first high-volume EV (a new version of the Fiat 500 small car) isn’t due to bow until later this year. 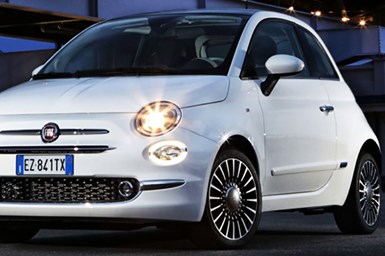 A new all-electric variant of the Fiat 500 is due this year.

FCA’s $47 billion merger with France’s PSA Group should help on both fronts. Partnering with HPPI would accelerate the process.

Despite a recent slowdown when subsidiaries were pulled, China is by far the world’s largest EV market. The country accounted for more than half the world’s sales of such vehicles last year.

Foxconn could help FCA gain a toehold in China and establish a local supply base. The partners initially will focus on China, with exports possibly following later. One step at a time.