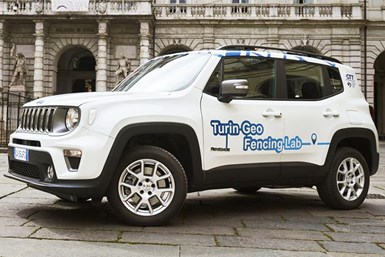 This would give the vehicles access to restricted areas and associated privileges, such as special parking spaces.

Ford and BMW have tested similar programs in other European cities in recent years. But FCA claims its program, dubbed the “Turin Geofencing Lab,” is the first that communicates directly with city transportation departments.

Initially, two Jeep Renegade 4xe plug-in hybrids will participate in the program. FCA plans to expand testing to other vehicles and cities later this year.

On-board sensors detect when a vehicle is about to enter a ZEV-restricted traffic zone. Drivers are alerted via a message in the infotainment center.

The system checks that “Electric Drive Mode” is ready, then automatically turns off the combustion engine and switches electric power.

Upon exiting the restricted area, the vehicle reverts to the previous drive settings.

What happens if a driver manually switches back to hybrid mode while the car is in a restricted area?

First, they get an alert that such behavior is a no-no and the system recommends changing back to electric mode.

City officials are notified if the warning is ignored and the vehicle continues to operate in non-electric mode. This could result in a fine.

FCA is partnering with Turin’s public transport authority, GTT and other local organizations on the program.

Geofenced technologies will allow more vehicles to access ZEV areas, which are being adopted in several large European cities.

The pilot program also coincides with FCA’s electrification rollout as the carmaker tries to make up ground on its rivals. In addition to the Renegade Rxe, the company is launching a plug-in hybrid version of the Compass crossover vehicle and a full-electric variant of the Fiat small car.