It turns out that was just the start of what promises to be a much larger partnership between Waymo and Fiat Chrysler Automobiles.

Today the companies announced that Waymo will be FCA’s exclusive partner for Level 4 autonomous technology (FCA ended its development agreement with Aurora Innovation earlier this year) across the carmaker’s various brands, which currently consist of Alfa Romeo, Chrysler, Dodge, Fiat, Jeep, Lancia and Ram. The deal also could be expanded to several more marques under FCA’s planned merger with PSA Group. 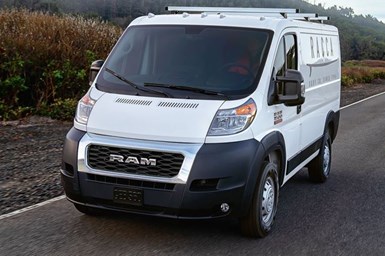 Waymo also will be FCA’s preferred partner on the development and testing of L4 autonomous light commercial vehicles for goods movement.

The first commercial vehicle application will be the Ram ProMaster van, which FCA notes is a highly configurable platform that will enable access to a broad range of global commercial customers. The Mexican-made ProMaster is based on the Fiat Ducato, which FCA builds in Italy through an existing agreement with PSA.

The companies didn’t provide a commercialization timeline or any other details about the expanded partnership.

The new FCA deal comes less than a month after Waymo struck a similar agreement with Volvo Cars, under which it will serve as that carmaker’s Level 4 partner. Volvo will integrate the Waymo Driver platform into an all-new electric vehicle architecture for ride-hailing services.

Waymo also is using Jaguar I-Pace electric crossovers in its testing fleet and is working with Renault-Nissan on potential mobility applications in France and Japan.

Waymo says its technology has been used to date in autonomous vehicles that have covered more than 20 million miles on public roads in 25 cites—including driverless rides in Phoenix that started late last year—plus 10 billion miles in simulation. The company, which recently raised $3 billion in external funding, launched its fifth-generation Waymo Driver suite of sensors and processors earlier this year. The technology is said to cost half as much as its predecessor.

Waymo and FCA say they already have started to work together to “imagine future FCA products for the movement of people and goods operated by the Waymo Driver.”

Commercial vehicles and delivery services likely will be a large part of the plan. Such applications allow for contactless transportation, a feature that is becoming increasingly important in the wake of COVID-19.