The lookalike grille is gone, but the resemblance remains
#Fiat #Chrysler #asia

Those boxy Jeep-like vehicles from India are, in fact, almost identical copies of the iconic military-style Jeep. 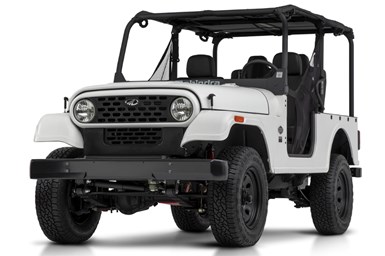 The commission ordered Mahindra to stop importing kits for its diesel-powered Roxor SUV and assembling them at its factory outside Detroit.

Mahindra, which is India’s biggest maker of SUVs, has been making the boxy Thar—which closely resembles the original Jeep, including its iconic seven-slot grille—in India for more than 70 years. It began doing so in 1947 under a license with Willys, which supplied the U.S. Army with military Jeeps during World War II.

Jeep stopped making the CJ, a civilian version of the Army Jeep, in 1986. But much of that model’s look carries over in the current Jeep Wrangler.

The $16,600 Roxor is a slightly modified version of the Thar. The main design change: replacing the Thar’s seven-slot grille, first with a five-slot variant and this year with an entirely different cheese-grater look.

FCA complained to the ITC about the Roxor in 2018, thereby triggering an infringement investigation. Last year Mahindra opened a factory outside Detroit anyway and began assembling Roxors from kits imported from India. The SUV is marketed for off-road use only.

Last November, trade judge Cameron Elliot agreed with FCA that the Roxor infringes upon the Jeep’s “trade dress” in six specific design elements. Among the obvious similarities are flat sides, a wrap-over hood with front hold-downs and a rear deck box whose top edge approximately aligns with the hood.

This isn’t over yet. Mahindra argues that it reached a design agreement with FCA in 2009 that allows it to build and market the SUV in the U.S.

The company also has said it is willing to make further design changes to placate FCA. Mahindra is hardly willing to be shooed out of the American market quite yet.