Fiat Chrysler Automobile’s Uconnect technology already is one of the best-rated infotainment systems in the industry. Now it’s about to get faster, larger, sharper, more capable and better connected.

Unlike systems from some rival carmakers, which have struggled with quality and complexity issues, Uconnect has performed consistently well since Chrysler introduced the feature in 2003. This is somewhat surprising considering the automaker is more of a follower than a leader in other technologies, such as autonomous and electric vehicles.

Powered by a new Android-based operating system, Uconnect 5 features a 12.3-inch center touchscreen—the largest ever for FCA—with an ultra-high (15 million pixel) resolution. The new system also is said to be five times faster than its predecessor. 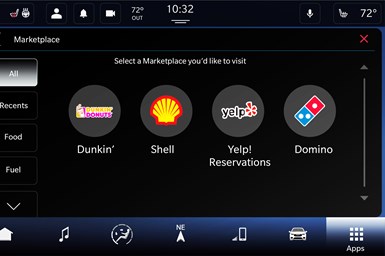 FCA design chief Ralph Gilles describes the system as being “more device-like (smartphone) than it is automotive."

In addition to its performance bona fides, this means greater personalization with reconfigurable displays and the capability to support five user profiles of preferences for music, seating, HVAC and mirror settings. Screen graphics are specific to brand and even vehicle trim level.

For the first time, two Bluetooth phones can connect simultaneously to in-vehicle settings. This would allow navigation from the driver’s phone to be displayed on the main touchscreen, while a playlist from another phone taps into the audio system.

Other features and upgrades include:

FCA says the system also has improved voice recognition technology that can recognize casual speech commands—even with a lot of background noise, such as when a window is down. In addition, customers with Amazon Alexa-enabled devices at home can use the virtual assistant to remotely start their cars and activate other features.

FCA believes UX can have a greater near-term impact than electrified and autonomous vehicles, noting that in-vehicle technologies such as Uconnect are a key consideration for more than half of new car buyers. Moreover, about two-thirds of respondents in a recent study say a good UX makes them more likely to be brand loyal.