A big chunk of broadcast spectrum set aside 21 years ago for car-to-car safety systems is about to be reassigned for use by wi-fi services.

The Federal Communications Commission’s decision isn’t a surprise. The panel granted unanimous tentative approval for the move in December. Today it announced it will conduct a formal vote on Nov. 18.

Maybe so. But carmakers and safety experts from the U.S. Dept. of Transportation and the DOTs of all 50 states, argue that taking that bandwidth from spectrum intended for traffic safety could hinder technology that is poised to end thousands of fatalities per year.

The debate is about the 5.9-GHz broadcast band. In 1999, the FCC set aside 75 MHz of spectrum in that band for so-called dedicated short-range-communications (DSRC).

Now the commission wants to reassign 45 MHz of that spectrum for non-traffic-related wi-fi. The panel also says it is ready to begin transitioning the remaining spectrum from DSRC to an emerging alternative: cellular V2X (C-V2X).

DSRC is a high-speed, highly secure type of vehicle-to-everything (V2X) that enables cars to automatically swap real-time data about their location, speed and direction of travel. Roadside devices further allow cars to exchange information with their surroundings.

Proponents say DSRC could reduce crashes and make traffic flow more smoothly. Developers fret that the FCC’s plan will result in wi-fi traffic at one end of the band that might disrupt the time-critical safety data they want to transmit at the other end. 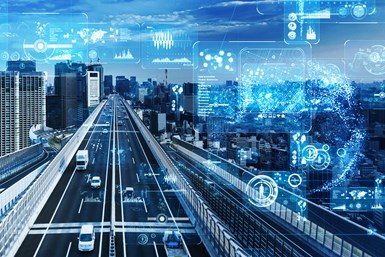 Developers of wireless products contend that the two services can share the 5.9-GHz band—with a buffer zone between them—without interference.

Use It or Lose It

The FCC agrees with wi-fi service proponents that carmakers have little to show after two decades of dabbling in DSRC. Chairman Pai says it’s time to move on.

“DSRC has done virtually nothing over the past 21 years to improve automotive safety,” he declares. “Automakers here and around the globe are turning the page on DSRC and moving to implement C-V2X. So should we.”

C-V2X—at least when 5G cellular service becomes widely available—will be able to blend the time-sensitive data transfers of DSRC while providing vehicles with ultra-high-speed connection to the internet.

Pai says the FCC’s new rules will enable the upper 30 MHz of the spectrum left for DSRC to “transition” from that platform to C-V2X.

Everybody wants to reduce traffic injuries and fatalities. But DSRC has fumbled its 21-year-long tryout as the best solution.

The newcomer, C-V2X, promises greater flexibility and more capacity than DSRC. But it won’t be ready for prime time until 5G cellular service becomes widely available a few years from now.

Until then, safety experts point out, traffic injuries and fatalities will continue pretty much unabated.