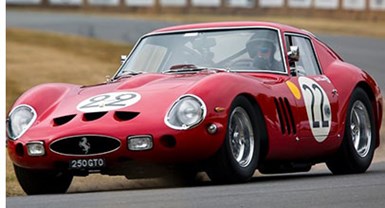 One of the reasons collectors are willing to pay such exorbitant fees for these models is their distinct design.

Another reason: They’re extremely rare. Just 36 of the iconic vehicles were built in the early 1960s.

But the latter rationale may not be quite as strong in the future.

Beauty in the Eye of the Courts

This week the European Union Intellectual Protection Office (EUIPO) partially revoked a 2019 ruling by an Italian court that protected Ferrari’s 2008 trademark on the GTO’s shape.

The legal battle was prompted by Ares Design, a high-end customizer based in the Italian carmaker’s hometown of Modena. Ares aims to produce a modern interpretation of the 250 GTO that it showcased in a 2018 concept car.

Ares argued that Ferrari’s 2008 trademark was filed in bad faith with the intent to prevent other companies from marketing their own lookalike models rather than for the Italian carmaker to relaunch the GTO.

Under EU intellectual property law, a trademark can be canceled if it isn’t used within a continuous five-year period. Ferrari hasn’t built a fullsize running version of the GTO in about 55 years.

As a result, the EUIPO’s Cancellation Division (yes, there actually is such a thing) ruled in Ares’ favor. Ferrari retained the exclusive rights to build toy and scale-model versions of the car.

Don’t expect Ferrari to give in.

In addition to filing an appeal, the carmaker has a few other options. This includes building a special edition of the 250 GTO, similar to its recent treatments of the Monza SP1 and SP2 speedsters.

Ferrari also could launch a so-called continuation series of the 250 GTO, something that the late Sergio Marchionne hinted at a few years ago. Jaguar and few other companies have used the strategy to produce a handful of their vintage models.

Ferrari already has taken action to protect the 250 GTO name by filing a trademark application earlier this month. But that would just prevent Ares from using the Ferrari’s nomenclature in the replica’s name.

Ares previously indicated it would build 10 of the replica cars, teaming the GTO-inspired body with the chassis of a modern Ferrari, such as the 812 Superfast or F12 Berlinetta.

Pricing likely would run about $1.3 million. Comparatively speaking, this would be quite bargain—for the super rich.