Finding a Purpose for an EV Grille

For years, carmakers have been using various sound alerts to help warn pedestrians of the presence of an approaching electric vehicle.

Starting this year, such technologies are mandated on all new vehicles sold in the U.S. that are capable of operating in silent mode.

Hyundai Mobis has developed a grille-based system that it claims is more efficient and less expensive than other external speakers.

EVs don’t need a traditional slotted grille to channel air into the engine compartment, obviously, because there is no longer an engine to cool.

But EVs still have grilles, because they look cool.

Now they soon may have a function again. 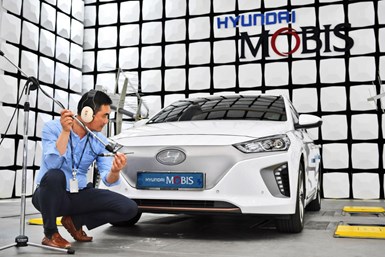 But in this case, a modified speaker is integrated into the grille. An actuator is installed to the back of the cover to generate the desired sound. Instead of using a separate device, the cover itself acts as a diaphragm to transmit and amplify the noise outward.

The technology eliminates acoustic pressure loss and significantly improves overall efficiency and performance, according to the supplier.

The integrated design also eliminates the need for brackets, and it and cuts the overall parts count of the system in half compared with other speakers. Packaging requirements also are halved, and weight can be trimmed by as much as two-thirds, Hyundai Mobis says.

In a hybrid-electric vehicle with a traditional grille, Hyundai Mobis says, its acoustic alert system could be installed behind the front bumper. This would allow it to produce the same effect when the vehicle is traveling in electric mode.

The supplier also envisions the technology being used in future autonomous vehicles. In these cases, a combination of sound and light could help communicate a vehicle’s presence, intended direction and right-of-way at an intersection to other motorists and pedestrians. Other alerts such as battery charging status also could be added.

Or the system could be used just for fun, such as blasting music during a tailgate, camping or other outside activities.