Fisker Plans to Have Ocean EV Made in Austria

Fisker is working on a deal to have its first model, the electric Ocean crossover vehicle, produced in Austria by contract assembler Magna Steyr.

The EV startup hopes to finalize the plan within a few months and begin output as soon as the last quarter of 2022. Fisker says the two companies also are exploring eventual similar arrangements in China and the U.S. 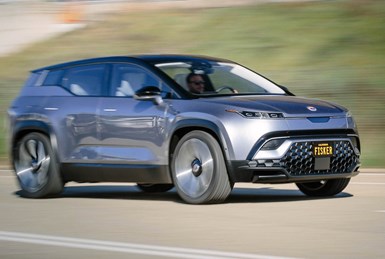 Magna Steyr has been producing cars and trucks for carmakers since 1906. A unit of Magna International, the company currently builds vehicles for BMW, Mini, Jaguar and Toyota. Among its past customers are Audi, Chrysler, Peugeot, Saab and Jeep.

The timing of the Fisker's planned deal with Magna Steyr confirms that the $37,500 Ocean won't hit the streets until 2023. Only four months ago, Fisker was talking about launching the compact crossover before the end of 2021.

The startup mentioned a 2023 sales launch for the Ocean last month when it announced plans to become a publicly listed company through a merger with "blank-check" merger facilitator Spartan Energy Acquisition. The listing would value Fisker at $2.9 billion.

Fisker unveiled a "final" prototype of the Ocean last year. The company expects the merger will give it $1 billion with which to finish final development and prototype testing work.

The all-wheel-drive Ocean is expected to come equipped with an 8-kWh battery and two motors that make a combined 300 hp. The company estimates a driving range of at least 250 miles, and perhaps 400 miles of its next-generation lithium-ion battery system is ready by 2023.