Automotive designer extraordinaire Henrik Fisker is still at it, trying not to simply build a car but an entire company. He has established Fisker Inc. (described as “designer and manufacturer of the world’s most emotion-stirring, eco-friendly electric vehicles and advanced mobility solutions”—which sort of gives you a sense of his POV on what they’re up to). 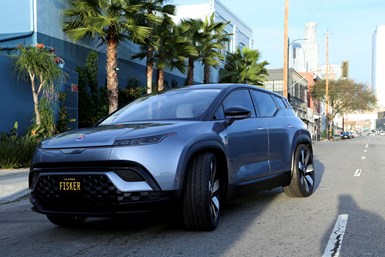 The first product is the Fisker Ocean, an electric SUV.

The company is spooning out information regarding the vehicle which will have a starting MSRP of $37,499 “for a limited number of vehicles,” according to Mr. Fisker, whatever “limited number” means.

However, he went on to say, “We have secured a global supply chain and manufacturing capacity that will result in projected production of more than 1 million vehicles between 2022 and 2027,” so he certainly thinks there is the wherewithal to have a whole lot of vehicles.

Apparently, one of the plans at Fisker Inc. is to offer the crossover with a no long-term contract, all-inclusive lease model, which will allow drivers to determine how long they’ll keep the vehicle, whether it is a month or several years. An astonishing 30,000 miles per year are included in the contract.

As for the Ocean vehicle itself, the company says that the range will be on the order of 250 to 300 miles and that there will be a lithium-ion battery pack of “approximately” 80 kWh.

There is a full-length solar roof that is said to be capable of providing the vehicle with 1,000 miles of range per year.

And there is a commitment to using lots of environmentally appropriate materials: the carpet is made of nylon that was once abandoned fishing nets. There is an interior suede-like material “Dinamica” that uses recycled polyester fibers that were once things like T-shirts and plastic bottles.