California-based electric vehicle maker Fisker isn’t due to launch its first model, the Ocean compact crossover, until late next year—about 21 months from now. 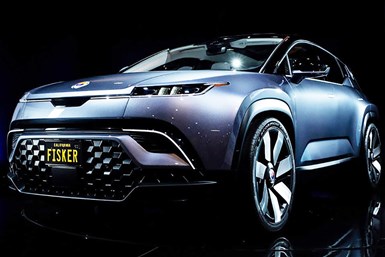 But that hasn’t stopped the company, which is headed by design guru Henrik Fisker, from continuing its steady release of teaser images and new tech details. The latest batch comes in lieu of Fisker’s previous plans for the Geneva auto show, which was canceled last week over concerns about the coronavirus.

Sizing up the Competition

The Ocean is about the size of an Audi Q5, Jaguar I-Pace or Chevrolet Equinox crossover. It measures:

By removing the rear parcel shelves, drivers can increase the Ocean’s cargo capacity from 20 cu ft to 25 cu ft. This would put it on par with the I-Pace. An optional “California Mode” will allow users to simultaneously lower all windows—including the rear hatch—if more space is needed to accommodate long items.

A multi-link rear suspension promises to bolster driving dynamics, which Fisker touts as providing a “supreme balance” between sportiness and comfort. The system is mounted on an isolated subframe to help limit noise and vibration from being transferred into the cabin.

To improve aerodynamic efficiency, the amount of air sent to the radiator is continuously changed as driving conditions shift. Battery temperature also is regulated to extend driving range and operating life, according to the carmaker.

New crash beams are designed to protect the battery in the event of a side-impact collision. In addition, Fisker says, body reinforcement has been added to protect the Ocean’s occupants in such accidents.

The interior is highlighted by a 16-inch center touchscreen and a 9.8-inch instrument cluster. Other goodies include a head-up display, central storage compartment and two wireless charging units to keep smartphones replenished. 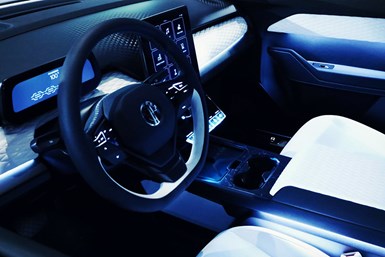 Fisker says it’s even developing a karaoke mode that will allow song lyrics to be displayed via the HUD.

A variety of sustainable materials are on tap. This includes polycarbonate polyurethane surfaces with reinforced rayon backing, upholstery derived from recycled polyester fibers and plastic bottles, and fully recycled carpeting made from used fishing net nylon.

Fisker reiterated the Ocean’s performance targets. Featuring an 80-kWh battery, the all-wheel-drive EV is expected to have a driving range of 250-300 miles.

A pair of electric motors will generate 300 hp. Fisker also is planning a performance variant, which it claims will be able to rocket from zero to 60 mph in less than three seconds.

The company says it has received deposits from thousands of customers worldwide. Pricing starts at $37,500, or $379 per month for a lease.

Watch for more info to dribble out over the next two years.