Not surprisingly, food delivery services have been one of the few business sectors to flourish during the coronavirus pandemic. And the trend is expected to continue, providing a safe and convenient alternative to actually going to a restaurant or picking up your own takeout.

This has created increased competition, including a wave of mergers and acquisitions. Last month, Uber lost its bid to buy Grubhub to Netherlands-based JustEat Takeaway, which prevailed in a $7.3 billion deal.

Now Uber has landed its own deal, albeit on a smaller scale. On Monday, the ride-hailing giant agreed to purchase Postmates, a 9-year-old startup that specializes in smartphone apps for delivery services. The all-stock transaction, which is expected to close early next year, is valued at about $2.7 billion. 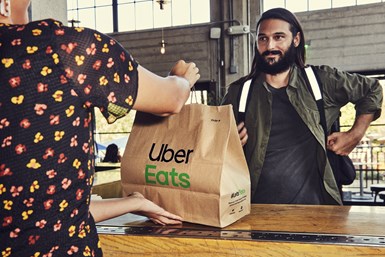 San Francisco-based Postmates, which had been exploring a potential initial public stock offering, accounts for 8% of the U.S. meal delivery market, according to market analysts. The company operates in 4,200 cities across the U.S.—with strongholds in Los Angeles and Miami—and has partnerships with some 600,000 merchants.

Following the acquisition, Postmates will be teamed with Uber Eats. The combined operations would control 37% of the current food delivery market in the U.S., putting it second behind market-leader Doordash’s 45% share.

New York-centric Grubhub is next best with an estimated 17% share of the U.S. market.

Uber has identified food delivery as a key growth market as demand for ride-hailing services has plummeted in the wake of COVID-19. The company also has exited several non-core businesses, including the recent sale of its Jump bike-sharing subsidiary to Lime.

Looking ahead, Uber says Postmates will benefit from a more efficient, combined merchant and delivery network with Uber Eats.