All-new E-Transit will go on sale in late 2021.
#Ford #facilities

Ford is spending $100 million to ready its assembly plant outside Kansas City, Mo., to make the electric E-Transit van. 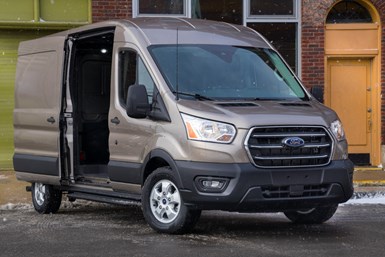 The facility currently assembles piston-powered Transits and the F-150 pickup truck. The E-Transit variant will be publicly unveiled on Nov. 12 and go on sale late next year.

What It’s All About

The E-Transit is the latest model in Ford’s nearly $12 billion global plan to electrify its fleet through 2022. Some $3.2 billion of that total will be used to prepare North American assembly and component plants.

One example of the latter: a $150 million investment in Ford’s Van Dyke transmission facility outside Detroit to make propulsion motors and e-transaxles beginning in 2021.

“This is just the first chapter,” says Kumar Galhotra, president of the Americas and International Markets Group. He says second-phase investments and more all-electric vehicles are in the pipeline.

Ford’s EV rollout in North America will begin with the Mustang Mach-E crossover vehicle in December. The upcoming electric F-150 pickup in mid-2022 will follow next year’s E-Transit debut.

Ford says it intends to add a second EV model at its Mach-E plant in Cuautitlán, Mexico. Last month the company confirmed it will spend $1.4 billion in Canada to transform its plant in Oakville, Ont., into an all-EV production facility by 2026.

Galhotra notes that, unlike most EV startups, Ford’s electrification strategy focuses on affordably priced electric models for the heart of the retail and commercial vehicle markets.

That, after all, is where the volume will be.