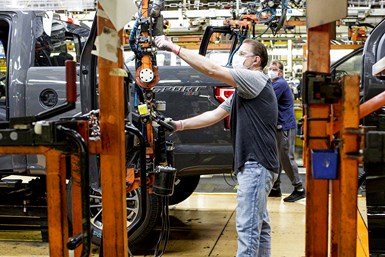 Like other carmakers operating in North American, Ford idled its plants in the region on March 18.

The original plan was to reopen them two weeks later. But the expanding pandemic—coupled with stay-home orders in key manufacturing states—kept automotive facilities shuttered until May 18.

Ford climbed back to 96% of its targeted volume in the U.S. at the end of last week, according to Chief Operating Officer Jim Farley. He says the company’s pickup truck plants began with two shifts, added overtime and will soon go to three-shift operation.

Detroit’s Big Three producers have been especially eager to rev up truck output quickly. No surprise there: U.S. demand for pickups, although dented by the coronavirus pandemic, has been far milder than the drop in sales of most other types of vehicles.

More important, U.S. carmakers count on pickups for a huge chunk of their profits in the truck-happy North American market.