Ford Applies the Heat in Police Cruisers to Arrest Coronavirus

Bake for 15 minutes at 133°, repeat as needed
#Ford #tech #sustainability

To help protect police officers from contracting or spreading the coronavirus, Ford has developed a system to quickly increase the temperature to 133°F in the interior of the Explorer-based Police Interceptor Utility vehicle. 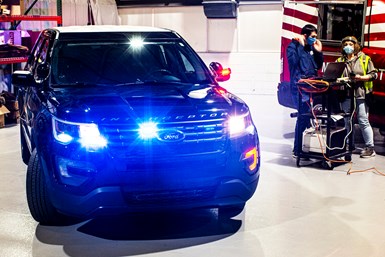 The retrofit software can be installed in any 2013-19 model.

Ford says large police departments with their own service centers can do the job themselves, while smaller units can work with local dealers.

The system can be activated when the Interceptor is parked and all occupants are out. The last part, of course, is critical (133°ﹾ is hotter than Death Valley, after all). 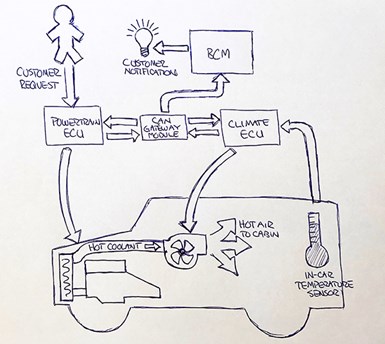 Once the vehicle has been cleared, the engine and climate control system work together to elevate the cabin temperature. This includes warming the engine and running the heat and fan settings at their highest levels.

The scorched earth environment is maintained for 15 minutes, which Ford says is long enough to effectively kill the virus on any interior surface. Microbiologists at Ohio State University verified that the time and temperature combination reduces viral concentrations by more than 99%.

A cool-down process helps lower the temperature to allow occupants back inside. The status of the process is indicated by flashing the vehicle’s taillights and hazard lights.

Ford says the heating process, when used in conjunction with sanitization guidelines approved by Centers for Disease Control and Prevention, provides a comprehensive cleansing of the interior.

The automated process can reach areas that otherwise may be missed by manual disinfecting procedures, seeping into crevices and hard-to-reach areas beyond common touchpoints.

Ford's engineering team has been developing the system since March based on a request by the New York City Police Dept. The technology already has been put to the test on police vehicles in California, Florida, Massachusetts, Michigan, New York and Ohio.

“First responders are in dire need of protective measures,” says Hau Thai-Tang, Ford's chief product development and purchasing officer. “We looked at what’s in our arsenal and how we could step up to help. In this case, we’ve turned the vehicle’s powertrain and heat control systems into a virus neutralizer.”

In addition to the midsize SUV, Ford aims to offer the quick-heating system in its other police cruisers in coming months.

The carmaker also is exploring ways to add antimicrobial materials in future models.

Other carmakers are working on or have already introduced similar systems. Earlier this year, for example, Geely Auto debuted an N95-rated “intelligent” air purification system in its new Icon crossover vehicle. And Tesla has long offered its even more potent bioweapon defense mode that can counter everything from anthrax to the plague.

Ford’s system isn’t quite so grandiose. But it does have the police on its side.