“Nobody likes driving around a parking structure looking for a parking spot,” said Mike Mansuetti, president of Bosch in North America, a man who admits to liking driving otherwise. 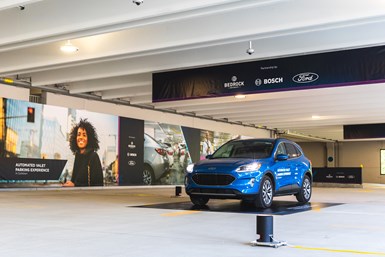 This Ford Escape in a garage in Corktown (in Detroit near the Michigan Central Station that Ford is rehabbing for autonomous tech development) that has been instrumented by Bosch for automated parking. (Image: Ford)

To that end, Bosch is collaborating with Ford, and Bedrock (a real estate development firm) on a demonstration program that will have Ford Escape test vehicles parking themselves in the Bedrock Assembly Garage in Detroit, a garage that has been instrumented with Bosch sensors.

Essentially this is a demonstration of V2I—vehicle to everything. As Ken Washington, Ford Chief Technology Officer, pointed out, the OEM is deploying modems in its vehicles for a variety of purposes (e.g., for SYNC 4, for over-the-air updates), and this is another example of how they are useful.

In the demonstration, which will be running through September, one of the Escapes participating in the program is driven to a designated area in the garage. The driver exits the vehicle, which is running. A phone app is then activated and the vehicle drives off, looking for a parking spot and then parking itself in the spot that is found.

One of the benefits of the system is that if all of the vehicles parked in a particular garage have the self-parking capability, there is the ability to park more closely together as there are no drivers or passengers in the vehicles that need to exit. It is anticipated that there can be a gain of about 20% in parking density.

Detroit Mayor Mike Duggan said, “Five years ago, who would have thought parking would be a choke-point in development in the city?”

When the driver returns to the garage, then the app is used again and the vehicle powers up and drives itself to the designated area. Should there be any pedestrians or traffic in the way, the vehicle stops until the route ahead is clear.

While this is the first deployment of the automated driving system in the U.S., last year Bosch and Daimler collaborated on a system in the parking garage at the Mercedes-Benz Museum in Stuttgart.