It didn’t take long. Just a few days after carmakers reopened manufacturing plants across the U.S. on Monday, Ford became the first company to have workers test positive for COVID-19.

As a result, Ford temporarily closed its Chicago assembly plant and Dearborn, Mich., truck facility on Tuesday and Wednesday, respectively.

To protect workers, carmakers and their suppliers are implementing dozens of new safety measures. Initiatives range from self-assessments at home and temperature scans before entering a facility to spacing out individual work areas, wearing personal protection gear and lots of cleaning. 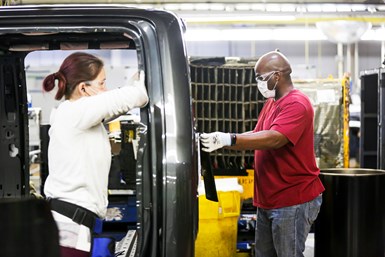 The affected Ford workers—two in Chicago and one in Dearborn—got past the temperature scans. They were tested after showing potential symptoms of having the virus.

All three and several others who came in close contact with them now are under self-quarantine at their homes for two weeks.

As soon as the test results came back, Ford notified all local employees and shut the facilities for cleaning. The process includes a “deep cleanse” and disinfecting the work area, equipment, team area and walkways used by the affected employees.

The Chicago plant, which builds the Ford Explorer, Police Interceptor and Lincoln Aviator SUVs, was back up and running Tuesday night. The Dearborn facility, which makes the Ford F-150 and Raptor pickups, was due to be back online Wednesday night.

Due to the incubation time of the virus, Ford says it’s unlikely the affected employees contracted COVID-19 at work this week.

VIPs in the House

All wore personal protective equipment and didn’t come in contact with any of the affected employees, according to the carmaker.

President Donald Trump is scheduled to tour another Ford facility in Michigan Thursday afternoon. The Rawsonville transmission plant has been making ventilators for COVID-19 patients for the last three weeks.

Trump’s planned visit already has created a stir. Earlier this week, Michigan Gov. Gretchen Whitmer, who Trump has been feuding with for months, issued an executive order prohibiting nonessential visits to Michigan factories.

Another problem: Ford requires all visitors to wear a mask. Trump has refused to don a mask at any time during the pandemic.

But it appears the president will prevail. Whitmer has no plans to block Trump’s visit, and Ford says it will make special provisions to allow him to go maskless.

Michigan has been one of the hardest hit states in the country with some 53,000 confirmed COVID-19 cases and more than 5,000 deaths.

Ford’s situation underscores the challenges of restarting production at huge plants with hundreds of workers during the pandemic. It also demonstrates the importance of maintaining strict safety protocols.