Saddle up. Ford is getting ready to (finally) let the all-new Bronco out of the stable.

The long-awaited model, which was announced at the 2017 Detroit auto show, will be unveiled next month. Sales are due to start in early 2021.

Dealers were informed of the timing yesterday during the annual National Automobile Dealers Assn. in Las Vegas, Automotive News reports.

Officially, not much. But there has been plenty of hints and speculation—plus a lot of anticipation.

The new Bronco will ride on an updated version of the T6 body-on-frame platform architecture that carries the Ranger midsize pickup.

A solid rear axle paired with an independent front suspension (matching the Ranger's setup) will be used to bolster off-road capabilities, which Ford recently demonstrated earlier this year with a camouflaged model it tested in California’s Mojave Desert. 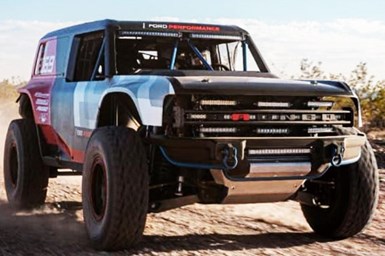 The sixth-generation model has an upright, squared-off stance that is reminiscent of the first-generation Bronco that debuted in 1966.

Two- and four-door models are planned to compete against the Jeep Wrangler.

Ford has filed several patent applications related to the systems.

Innovations include a hand-operated release for the doors to speed the removal process. By comparison, Wrangler owners must unscrew three bolts per door to take them off.

The roof and doors can be easily stowed in the vehicle. The side mirrors are attached to the front pillars, rather than to the doors, so they remain functional at all times.

The Bronco also is expected to feature an off-road navigation system to help motorists find their way back when straying beyond conventionally mapped areas. The technology already is available on select models outside the U.S.

Other reported goodies include:

Hundreds of other accessories are planned. Many of these are expected to be available at launch to help boost profitability.

The base engine likely will be the same 2.3-liter 4-cylinder mill used in the Ranger. Paired with a 10-speed automatic, the engine generates 270 hp and 310 lb-ft of torque.

A high-performance version (possibly with Raptor badging) with a 2.7-liter twin-turbo V-6 also has been rumored that could kick out 330 hp and 400 lb-ft of torque. Some sort of hybrid option also is expected.

A smaller off-road crossover, dubbed the Bronco Sport, also is in the works. The vehicle, which will ride on a different platform, will be unveiled in April and introduced later this year.

A pickup variant of the Bronco also is said to be in development. But that vehicle likely wouldn’t be launched until about 2024.