Ford says the upcoming plug-in hybrid version of its Escape compact crossover/SUV will have a best-in-class efficiency rating of 100 mpg-equivalent (mpge) rating from the U.S. Environmental Protection Agency.

Of course, there isn’t a lot of competition in the segment these days.

Toyota’s new RAV4 PHEV, the Escape’s main plug-in rival, is a close second with an estimated EPA rating of 94 mpge. 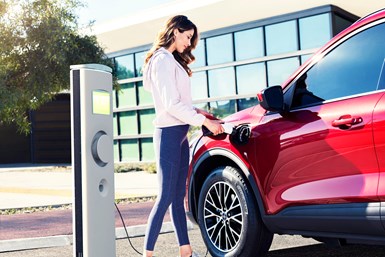 The Escape hybrid benefits from a 41-mpg rating when operated solely by its 2.5-liter Atkinson Cycle engine. It also is expected to start at about $34,200, which would make it about $5,000 cheaper than the RAV4 PHEV.

But the RAV4’s larger 17.8-kWh battery is expected to provide an all-electric range of 42 miles, outdistancing the Escape PHEV by five miles. Generating 302 hp, the all-wheel-drive RAV4 also outguns the front-drive Escape by 93 hp.

Both vehicles are much more efficient than the rest of today’s plug-in hybrid SUV/crossovers, most of which are larger and pricier. The lineup includes the Mercedes-Benz GLC350e (56 mpge), Mini Cooper SE Countryman (73 mpge), Mitsubishi Outlander (75 mpge) Porsche Cayenne (50 mpge), Subaru Crosstrek (90 mpge) and Volvo XC60 T8 (59 mpge), according to plugincars.com.

The new generation of plug-in hybrids are considerably more efficient and more powerful than their earlier counterparts.

The 2021 Escape PHEV is Ford’s fourth-generation hybrid propulsion system and the carmaker’s first plug-in model since the Fusion Energi was discontinued last year—along with the standard Fusion and most of Ford’s other cars. Ford introduced the first-generation system with the non-plug-hybrid version of the 2005-model Escape.

The Escape’s 14.4-kWh lithium-ion battery, which is packaged under the second row of seats, has a greater power density and is considerably smaller than earlier generations. Ford says the combination results in four times more cargo space and 11 miles more electric range than the Energi midsize sedan.