The carmaker launched similar tests in London in 2017 and later expanded the program to Valencia, Spain. As in those markets, the Cologne program will use GPS to pinpoint a vehicle’s location and determine if it is driving in a low-emission zone. 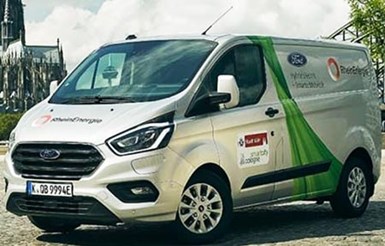 The automated process makes it easier for authorities and drivers to identify ambiguous and changing zone boundaries, Ford notes. The carmaker will monitor how often a vehicle is driving in electric mode and calculate corresponding fuel economy and emissions improvements.

During the one-year Cologne program, blockchain technology will be used to securely record emissions and other data when a vehicle is operating in designated zones. Blockchain uses a decentralized computer network to create and share permanent time-stamped data, which proponents say make it virtually impossible to hack.

Ford will supply nine customized plug-in hybrid Transit vans (pictured) and one plug-in Tourneo MPV to five Cologne municipal fleets. The vehicles will be equipped with the FordPass Connect cellular modem and software that enables geofencing and blockchain capabilities.

The Transit and Tourneo PHEVs can operate in electric-only mode for 56 km (35 miles) and 53 km (33 miles), respectively, on Europe’s NEDC cycle. The electric drivetrain is teamed with a 1.0-liter EcoBoost engine to increase overall range to about 500 km (310 miles).