The machines were designed by GE affiliate Airon, a Florida-based maker of pneumatic life support devices.

The Airon device is powered by the air pressure of a hospital’s compressed oxygen supply line and doesn’t require an electrical connection.

Ford and GE Healthcare expect to make 1,500 of the Airon breathing machines in April, then crank up production to 10,500 units in May and nearly 38,000 in June. By then, Ford hopes to achieve output of as many as 30,000 devices per month as needed. 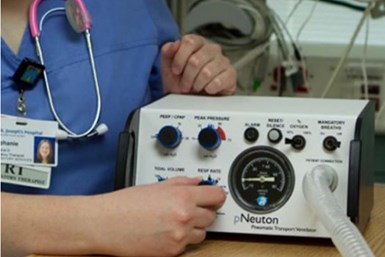 Before going any further, let’s get our terms sorted out. Ventilators are complex devices that help patients breathe by moving oxygen-rich air into and out of their lungs.

Respirators—masks are one example—are used by health providers to filter out contaminants in ambient air. More sophisticated “powered air-purifying respirators” employ a blower to push ambient air through a filter for their wearers to inhale.

Airon currently assembles only three of its FDA-approved pNeuton Model A ventilators per day. In early April, a Ford team will help the company boost output at its own assembly facility in Florida.

Back in Michigan, a variant of the same design—dubbed the Model A-E—will be produced by a team of 500 United Auto Workers union members deployed in three shifts. Ford notes that the device, which is only 5 inches tall and 10 inches wide, is well-suited for emergency rooms and intensive care units.

That’s not all. Ford and GE Healthcare also are pursuing a separate project to launch joint production of a simplified version of a GE-designed ventilator. The partners say the project is tied to a “request for help from U.S. government officials.”

Separately, Ford is working with 3M on two related programs. One effort seeks to hike output of 3M powered air-purifying respirators. A second initiative is developing a new powered respirator design that uses existing parts supplied by both companies.

The proposed device would employ 3M HEPA air filters and a fan from the front seat cooling system in F-150 pickup trucks. The system would be powered by batteries normally found in portable power tools. Ford figures that cranking up one of its factories to make the respirator could multiply 3M’s overall output tenfold.

Focusing its manufacturing know-how to nonautomotive products is not new for Ford, of course. The company famously produced four-engine B-24 Liberator bombers during World War II, assembling them from 1.2 million parts at an unheard-of rate of one per hour.

The carmaker also has had brushes with medical equipment. Back in the early 1940s, the company points out, it developed an inexpensive and portable infant incubator. And it designed and built a so-called iron lung—this one was made mostly of rubber and plastic—to help young polio victims breathe.