Ford Holds Off Until 2021 on Plug-In Escape

Fans in the U.S. will have to wait until early 2021—a year after the planned debut—to get their hands on a plug-in hybrid version of the Ford Escape small crossover.

Plant disruptions caused by the coronavirus pandemic already have put the vehicle six months behind schedule. 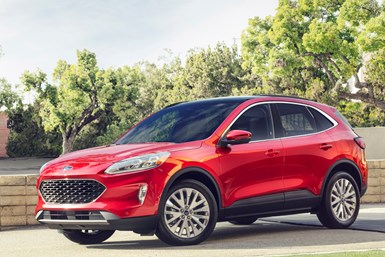 Now Ford says it won’t release the car for production until it figures out a fix for European versions of the plug-in, sold there under the Kuga nameplate, that have caught fire during battery charging.

Seven such fires prompted Ford to recall 20,500 Kuga plug-ins in Europe. The company believes the problem is insufficient venting of heat generated during the charging process. But a definitive cure may be months away, a spokesman tells Bloomberg News.

Meanwhile, Ford says owners of Kuga plug-ins may continue to drive their Kugas, which will function safely as a conventional hybrid, as long as they don’t plug in their vehicles until repairs are made.

Ford has been building piston-only versions of the Escape at its factory in Louisville, Ky., since the end of last year. The model comes in five trim levels and, in keeping with a more aerodynamic exterior aimed at hiking the vehicle’s sophistication, a long list of tech options. 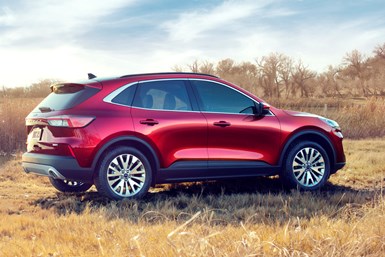 The base Escape is more than 200 lbs lighter than its predecessor, thanks to more extensive use of high-strength steel. Ford says all versions of the Escape target driving ranges of at least 400 miles.

The Louisville plant has reintroduced a standard hybrid variant with no plug-in capability. Ford says the plug-in variant, which uses a larger storage battery, will be able to travel a best-in-class 550 miles per fill-up, including 30 miles in electric-only mode.

A delay in launching the plug-in Escape isn’t all bad. U.S. demand for small crossovers in general has been down by one-third this year, largely because of the impact of COVID-19.

But Ford is counting on plug-ins to provide a smooth transition for itself, not to mention its customers, from internal combustion power to an eventual future of all-electric propulsion.