Most of us have some level of emotional connection, good or bad, with our cars. By brand, Ford tops the list in the U.S.

So says New York City-based marketing firm MBLM, which sorts it all out in its Brand Intimacy 2020 Study. Now in its 10th year, the report analyzes nearly 400 brands across 15 industries. 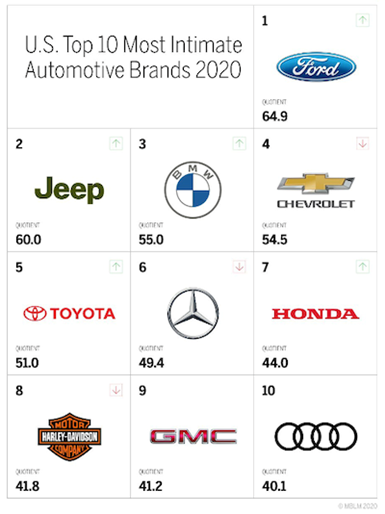 MBLM (pronounced “emblem”) says a strong emotional bond with a brand establishes trust, which it contends is far more valuable than loyalty. The company asserts that brands with stronger intimacy ratings outperform not-so-connected marques in terms of revenue and profit growth, partly through their ability to charge more for their wares.

MBLM arrives at its ratings by calculating a consumer’s emotional attachment to a brand in terms of perceived value, image, nostalgic connection, integration with daily life and ability to pamper.

The result is a “brand intimacy quotient” between 1 (lousy) and 100 (unimaginably perfect in every way).

Amazon squeezed past Disney to become this year’s most intimate brand with a quotient of 68.3. Ford ranks fourth overall at 64.9. Three other automotive brands—Jeep (60.0) , BMW (55.0) and Chevrolet (54.5)—also found spots within this year’s top 10 list.

Not surprisingly, the study’s ratings vary by a consumer’s sex and age. Ford is the overall top brand among men, while Disney leads for women, for example. (Both sexes agree that Amazon is second and Apple is third.)

Each of the three age groups MBLM analyzed has an automotive brand on its top-five list. For adults under the age of 35, it’s Ford. Among consumers between 35 and 54, it’s Jeep. And for those aged 55-64, Toyota is the highest-ranked vehicle brand.

What to make of all this? These ratings are surely a big deal if your favorite brands rank where you think they should.

But there are lots of ways to assess impact. MBLM’s intimacy quotient is a novel take on the tricky business of measuring just how well a brand connects with its customers.