Ford plans to create a new sub-brand with the launch of its revived Bronco nameplate.

In addition to three “Built Wild” vehicles, the initiative provides owners with access to off-road courses, driving instruction and an online community known as Bronco Nation.

The vehicles will be unveiled on July 13.

The initial Bronco lineup includes 2- and 4-door versions of the Bronco midsize SUV and the Bronco Sport compact crossover. The latter, so-called Baby Bronco, shares a platform with the current Escape crossover. 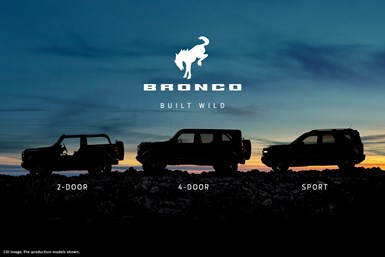 More models, possibly including a Bronco-based pickup, also are being considered.

The vehicles will feature a Bronco emblem on the front rather than Ford’s traditional Blue Oval.

All Broncos models will come with standard four-wheel drive and a special terrain management system. Ford says vehicles have been subjected to extreme durability tests that includes thousands of lab, proving ground and real-world driving evaluations.

Ford is building four “adventure playgrounds” that Bronco owners can use. The centers will feature off-road courses for drivers of all skill levels, according to the carmaker.

Bronco Nation is described as an independent online community geared toward off-road fans and outdoor enthusiasts. The goal of the site is to elevate the excitement of owning a Bronco.

A variety of Bronco-themed merchandise also will be offered. This will include remote control vehicles, apparel, collectibles and novelty items.

The Bronco branding is similar to Ford’s Mustang strategy, which soon will include the Mustang Mach-E electric crossover vehicle.

In addition to offering multiple vehicles, both brands build on 1960s-era nostalgia. The original Bronco debuted in 1966, a year after the Mustang.

“Like the original, the all-new Bronco family is engineered to take you to epic places, with capability to deliver confidence on any type of terrain,” enthuses Jim Farley, Ford’s chief operating officer.

The Bronco SUV, which shares a platform with the Ranger pickup truck, will be built at Ford’s Michigan Assembly Plant in Wayne, Mich. The Bronco Sport will be produced in Hermosillo, Mexico.