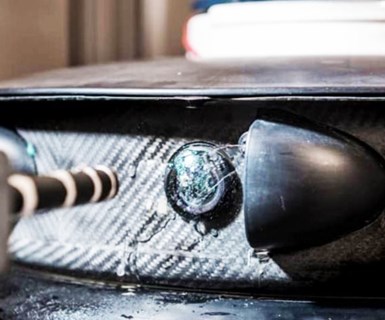 To better understand and test ideas, the carmaker sprays dirt, dust and water at sensors. It also made a “bug launcher” to shoot insects at high speeds at sensors, and smeared synthetic bird droppings on camera lenses.

One innovation the company is currently testing is an air deflector within the roof-mounted “tiara” that houses the lidar, camera and radar array on prototype autonomous vehicles.

As the car is driving, air is funneled out of the tiara through slots near the camera lens. This creates an air curtain that deflects the “vast majority” of bugs and other objects before they hit the lens.

An advanced self-cleaning system is used to deal with whatever makes it past the first layer of defense. Software detects if a sensor is dirty and triggers nozzles to spray wash any affected sensor. Air is routed against the surface to quickly dry off the cleaning solution.