As renovators of old buildings know, you never know what you’re gonna find.

In Ford’s case, in the long-abandoned train station in Detroit’s Corktown district, the discoveries have included a basement-turned-lake and lots of whiskey stashed in the walls.

The 18-story depot was heralded as the tallest train station in the U.S. when it opened in 1913. The 107-year-old building has been slowly disintegrating since the last of its train services petered out in 1988. In recent years, the depot has served as a grim symbol of Detroit’s decay. 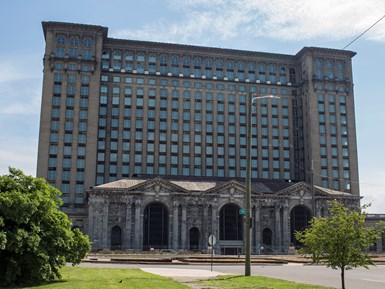 Ford has other plans. The company swooped in 18 months ago with a $740 million vision to transform the 505,000 sq-ft edifice, a couple of large buildings nearby and several acres of adjoining vacant land. The area will complement the 45,000 sq-ft refurbished factory Ford opened a few blocks away in 2018 to house the company’s vehicle electrification and autonomous-driving development teams.

The aim is to transform the depot, which once serviced 200 trains per day, into the centerpiece for a trendy 45-acre campus for Ford’s advanced-mobility activities. The company envisions an array of retail shops, entertainment venues, residential housing and perhaps even an on-site mobility tech test facility.

Ford spent some $90 million to acquire the depot itself. Now it’s investing roughly four times that amount to return the station to its former glory, minus the rail service. 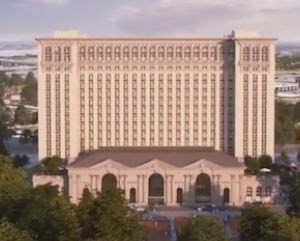 After: Ford’s vision of the refurbished train station.

Mary Culler, who heads the redevelopment for Ford, says the rehab effort turned up a few surprises. One was 650,000 gallons of water in the basement. The lake was the result of rain and melting snow leaking in over the past three decades.

More intriguing was discovering a large number of whiskey bottles—many of them still full—found stashed in the walls. No word on the quality of the booze. Or why those bottles were tucked away in the first place.

Some of the artifacts will end up on display in the building’s visitor’s center when the structure reopens in 2023.

Culler says the rehab effort has now moved beyond trash removal and the job of shoring up the structure and weatherizing the building. Now it’s all about masonry work, which includes restoring the limestone features and ornate main lobby.

When it’s all done, the station and surrounding campus will provide 1.2 million sq ft of office space for 5,000 employees. Not to mention another hotspot for Detroit’s booming downtown renaissance.