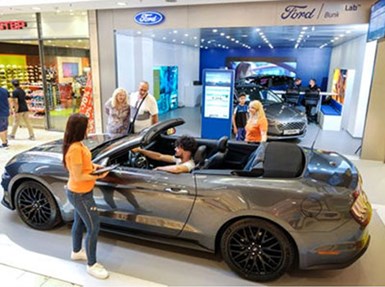 Pilot programs were launched in conjunction with local dealers this year in Belgium, Germany (pictured), Italy and Quebec City. A location somewhere in the U.S. also is in the works.

The storefronts—dubbed Smart Labs—typically house several vehicles and product liaison representatives who can answer questions and pass leads onto the dealership’s sales team. Some locations also have vehicles on site for visitors to test drive.

The 1,800-sq-ft Brussels outlet generated 200 leads the first month it was open, and doubled that volume two months later in July, according to Benjamin Abeloos, the sales and marketing manager of the dealer partner. He tells The Detroit News that the July leads resulted in 25 sales from customers who otherwise may not have visited a Ford dealership.

Dealers are using some of the mall-based showrooms to close sales directly onsite. Although fewer people are visiting traditional stand-alone dealerships, Ford says the intent is to supplement such facilities rather than replace them.