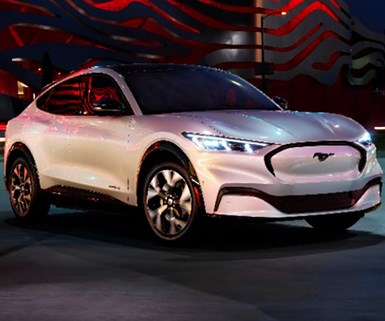 The company unveiled the 2021 Mustang Mach-E on Sunday night in Los Angeles. Sales will start next autumn at a base price of $45,000.

Built on a 117-inch wheelbase, the crossover is about two inches shorter than the three-row Explorer SUV/crossover vehicle. Ford says the Mach-E stretches to 186 inches from bumper to bumper, making it more than a foot shorter than the Explorer. 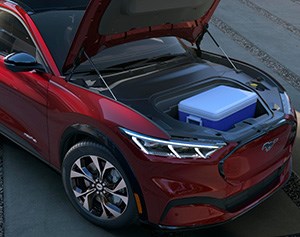 The traditional Mustang look is complemented by modern updates such as a panoramic sunroof and flush door handles.

Ford says the all-wheel-drive version of the crossover with an extended-range battery will generate 332 hp and 417 lb-ft of torque. The GT performance edition is expected to boost output to 459 hp and 612 lb-ft of torque, and propel the vehicle from zero to 60 mph in about 3.5 seconds.

Other available features include Brembo brakes and a MagneRide damping system. The crossover vehicle’s under-floor battery placement enables a near 50:50 weight distribution and low center of gravity to enhance ride and handling characteristics. 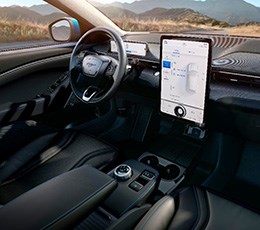 In addition to a 29-cu-ft rear trunk, the Mustang Mach-E is equipped with a front unit. The so-called “frunk” has a 4.8-cu-ft of storage and a drain that will allow owners to pack it with ice for use as a cooler.

The interior is highlighted by a 15.5-inch vertical infotainment display. Users will be able to access controls via the touchscreen, voice commands or hand gestures. Over-the-air software update capabilities will be added later.

The Mustang Mach-E also will be the first Ford vehicle that enables its operators to lock and unlock the vehicle with a phone rather than a key.