Level 2 tech will include a driver-monitoring camera
#Ford #tech

Ford is joining the crowd with its own Level 2 automated driving feature.

Called Active Drive Assist, the technology can pilot a vehicle automatically over some 100,000 miles of pre-mapped highways in the U.S. and Canada. Drivers are expected to monitor road conditions and be prepared to resume control at any moment. 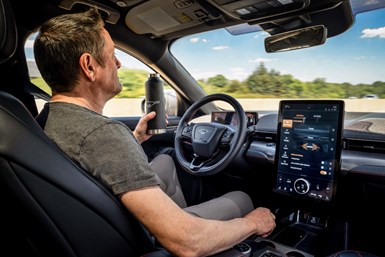 Ford predicts first-year sales of 100,000 systems. The technology will debut late next summer in two 2021 models.

The system will be standard in high-end versions of the new Mustang Mach-E electric crossover, or as a $3,200 option for base-level models. Ford anticipates an 80% take rate for the technology.

The feature also will be available as a $1,696 option for F-150 series pickup trucks that also are equipped with Ford’s Co-Pilot Active 2.0 driver-assist package. Buyers can opt for the enabling hardware now, then activate the system by purchasing the necessary software for $600 when it becomes available next year.

A driver-facing camera makes sure the operator is paying attention to the road ahead. If necessary, visual prompts displayed on the instrument panel alert the driver to check the road or take control. 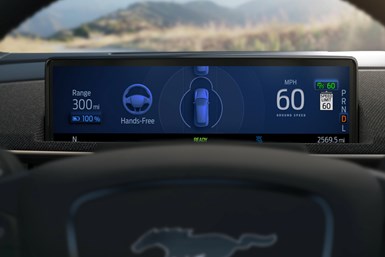 The same camera also monitors the driver when the system is switched off, but the vehicle is using the automatic lane-centering feature. The latter technology works on any road with lane markings.

Ford plans to periodically update Active Drive Assist software wirelessly. The company says the new over-the-air system also will be able to remotely update almost all other onboard computers as needed, thereby reducing the need for customer visits to their dealer.

Ford claims its new system is cheaper than tech from its rivals. General Motors’ similar Super Cruise hands-free feature, for example, costs about $4,000, plus a monthly fee of $25.

Tesla now equips all its models with standard semi-automated capabilities—but without driver monitoring. A more advanced, $10,000 version, which the company describes as “full self-driving,” began beta-testing by select owners last week. Tesla CEO Elon Musk opines that the Level 4 system is actually worth more than $100,000.

Ford expects to add Active Drive Assist to all its “most popular mainstream nameplates.” It hasn’t yet specified which ones it has in mind or when they might get the system.