A nice set of alloy wheels can set you back a thousand dollars or more to replace. That makes them a prime target for thieves, who are becoming more adept at getting around locking wheel lug nuts.

But Ford is fighting back with a new way to keep wheels securely fastened to the vehicle… by using a voice-customized 3D manufacturing process. The carmaker’s European operations developed the technology with additive manufacturing specialist EOS.

A recording of the car owner’s voice is used to create a unique biometric identification—like a fingerprint or iris scan. 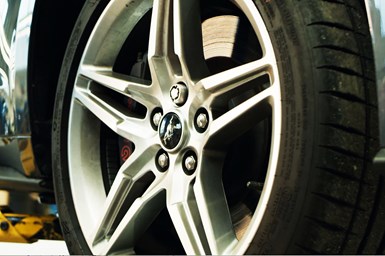 Software converts the soundwave into a unique circular pattern that encompasses both the locking lug nut and its key. The integrated one-piece, stainless steel unit then can be built in layers via 3D printing.

The key is separated from the nut once the build is completed. Ford notes that this may require a small amount of grinding.

The design also features unevenly spaced ribs inside the nut, with increasingly wider indentations. This prevents a thief from making a wax imprint of the pattern (which apparently is a thing according to Ford), as the mold would break as it’s pulled out.

In addition to security benefits, 3D printing could be used to create customized wheel nuts. Ford’s design suggestions include:

Check out a video about Ford’s technology.

Ford has been one of the early leaders in using 3D-printing—previously used mainly in prototyping—in production vehicles. Last year, the company began using the process for small parts in several niche applications, including the Mustang GT500.

No timeline was given for possible production applications—or costs—for the 3D-printed locking wheel nuts. But the technology is another step toward mainstreaming additive manufacturing.

Until the 3D units hit the streets, here’s some info on how to protect your wheels.