BMW, Ford, Toyota and Volkswagen have thrown in the towel on the coronavirus pandemic and are temporarily suspending all vehicle production in Europe.

In North America, the United Auto Workers and Unifor unions are calling for a two-week shutdown of union-organized factories to protect workers. The UAW says such action is justified by guidelines set by the World Health Organization and U.S. Centers for Disease Control. 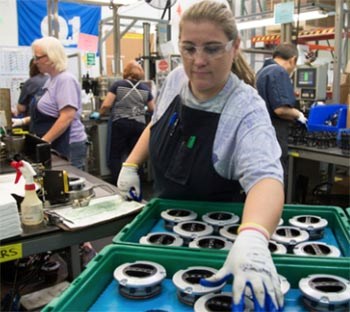 The union’s demand comes only four days after it led the formation of a task force of Big Three CEOs to implement plant-level measures that would enable safety production to continue.

Ford says all its engine and vehicle plants in Europe will suspend operations on Wednesday for “a number of weeks.” The decision covers manufacturing operations in Cologne and Saarlouis, Germany’ Craiova, Romania.

Ford idled its engine and vehicle complex in Valencia, Spain, yesterday after three workers were confirmed to be infected by the coronavirus.

Ford says the decision to reopen its plants will depend on how the pandemic spreads, local and European Union restrictions on travel, the reliability of the region’s supply base and when the European retail market revives.

Volkswagen, which idled factories in Italy, Portugal, Slovakia and Spain earlier this week, will expand the shutdown to include the remainder of its more than 70 European plants by about the end of next week. VW estimates the closures will last for 14 days.

VW says it decided on a broader shutdown after its powerful works council determined it would be impossible for manufacturing workers to practice social distancing—keeping at least 6 feet apart—while doing their jobs. For now, VW plants in the U.S., Mexico and Brazil will remain open.

What Other Carmakers Are Doing

Other car companies also are beginning to stop production at certain facilities in Europe:

BMW expects by the end of the week to suspend production at all factories in Europe, plus its plant in Rosslyn, South Africa, until April 19. The company notes that its retail sales in Europe have collapsed because of the pandemic.

Toyota is expanding an earlier shutdown this week of plants in France and Portugal to encompass three more final assembly and powertrain production facilities in Czech Republic, Poland and the U.K.

Almost all employees at the company’s European headquarters in Belgium are working from home. Toyota most of its retail showrooms in the region are at least partly closed. The company is maintaining service parts distribution, which it considers a public safety activity, continue to function.

Volvo has halted production at its factory in Ghent, Belgium, and says it doesn’t know when the facility will reopen. Other company plants in Sweden remain open for now.

The pace of production updates linked to the coronavirus in Europe underscores how quickly the landscape can change for a pandemic that was considered no big deal in that region just a few weeks ago.

Much of the U.S. had been hoping to dodge the drama of the pandemic. That optimistic outlook seems less likely with every passing day.