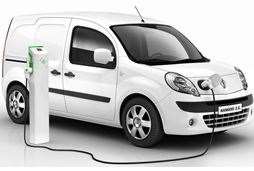 The configuration doubles the driving range of the vans to 250 miles on the European cycle. Symbio FCell, which is partially owned by ENGIE and Michelin, supplies the fuel cell stacks.

ENGIE claims the 50 specially equipped Kangoo vans, which will be used by technicians for service calls to commercial customers, constitute the world’s largest fleet of fuel cell-powered vehicles. Alphabet Inc. owns the vehicles and is leasing them to ENGIE. Arcoa Energy in the U.K. also has a fleet of Kangoo ZE fuel cell-electric vans.

ENGIE will recharge and refuel the Kangoo vans at its facility near Paris. Hydrogen will be produced onsite via an electrolyzer powered by renewable energy. It will take less than 5 minutes to fuel the vans with hydrogen.

ENGIE’s GNVert subsidiary operates the charging station, while McPhy provides the hydrogen technology and pump. The program is partially financed by the European Fuel Cells and Hydrogen Joint Undertaking.