Fun in the Mud with the New Bronco

The all-new Bronco SUV promises to be one of the most capable off-road vehicles in Ford’s history. It may even outperform its Jeep counterparts in some maneuvers.

Want proof? Check out Ford’s latest teaser video (above), which shows the 2021 model romping through the mud.

It’s not just any mud. It’s Georgia Piedmont clay, which Ford claims is one of the most difficult terrains to trudge through when it’s wet. That’s because the soil is extremely dense (particle diameters of less than 0.002 mm), making it slick and sticky in muddy conditions. 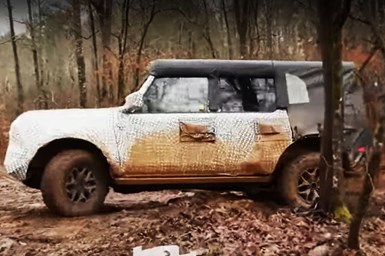 Using a second parking brake, such a system locks the inside rear wheel to enable a tighter turning radius when maneuvering around an object at low speeds. Drivers can activate the Bronco crawler via a dashboard button when the vehicle is operating in four-wheel drive, according to Bronco6G.com.

Toyota has a similar system in its rugged Land Cruiser SUV called “Turn Assist Control.” But, the enthusiast site points out, Jeep doesn’t offer anything equivalent.

In addition to front digging, Ford used the Georgia tests to assess the Bronco’s tires and fording capabilities. The carmaker notes that it’s essential for tires to shed mud in order to maintain traction.

The mud tests also identify potential problem areas where mud sticks to a vehicle. Not only is caked on grime difficult to clean, it also could damage underbody components if they’re not protected properly.

The new Bronco will ride on an updated version of the T6 body-on-frame platform architecture that carries the Ranger midsize pickup.

A solid rear axle paired with an independent front suspension (matching the Ranger's setup) will be used to bolster off-road capabilities. The Bronco also is expected to feature an off-road navigation system to help motorists find their way back when straying beyond conventionally mapped areas.

The base engine is expected to be the same 2.3-liter 4-cylinder mill used in the Ranger. An optional 2.7-liter twin-turbo V-6 also has been rumored. Transmission choices are said to include a 10-speed automatic and a seven-speed manual. The latter will include a special low-speed crawler gear.

Ford previously showcased the Bronco’s off-road bona fides with a special edition model that competed in the Baja 1000 desert race in Mexico last autumn. The company also released a video of the vehicle operating in California’s Mojave Desert (below)

The latest video is posted on BroncoNation.com, which is operated by Jackson Dawson, one of Ford’s marketing partners.

The Bronco’s official unveiling is expected later this month. The debut had been planned for March but was pushed back due to the coronavirus.