Daimler and Geely are ready to revive the German company’s Smart minicar brand as an independent global electric car company. 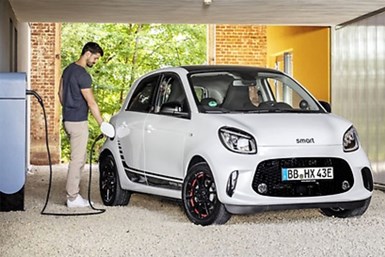 The two partners revealed plans in March for their 50:50 joint venture. Now the new company has a name (Smart Automobile) and the funding ($777 million) to get started.

By 2022, the venture’s factory in China will begin making the latest-generation Smart and marketing its EVs worldwide.

Daimler turned Smart into an electric-only brand four months ago. The joint venture describes the marque as “urban premium” with lots of connectivity features to go with its environmentally clean image.

Smart started out in 1997 as the result of a collaboration between Daimler and trendy watchmaker Swatch. The first result, a highly engineered and relatively pricey two-seat city car, debuted as the piston-powered ForTwo.

A four-seater, the ForFour, then coupe and cabriolet variants, soon followed. The first battery-powered Smart, marketed mainly to car-sharing fleets, came along in 2007.

But sales of Smart cars in general—and electric versions in particular—have not been impressive. By early last year, Daimler was ready to dump the brand entirely.

The German carmaker agreed to form Smart Automobile with Geely as a way to wash its hands of financial responsibility for the brand without actually killing it off.

Geely, which owns nearly 10% of Daimler, is mostly interested in leveraging the venture to get to Daimler technologies. Making the venture itself a commercial success will mean cutting product costs and figuring out how to make Smart relevant in the nascent EV market.