Geely unveiled its first pickup truck last week and it erecting a factory in Zibo to make 100,000 vehicles, including trucks, per year.

Separately, a venture involving General Motors, SAIC and Guangxi Automobile has filed for permission to build its first pickup, to be called the Zhengtu, Reuters reports. 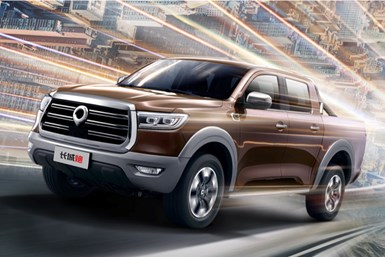 Pickup trucks remain relatively rare in China. Sales in January-July this year totaled about 251,000 units, representing only 2% of the passenger car market, according to the China Assn. of Automobile Manufacturers.

The segment currently is dominated by Great Wall Motor, which has been making pickups since 1996. Its trucks also are exported to Africa, Australia, Europe, the Middle East, Southeast Asia and South America.

Great Wall says its domestic sales of its truck jumped 38% through the first seven months of 2020, even as China’s demand for SUV/crossovers and sedans was shrinking.

Producers say China isn’t likely to experience a U.S.-like mania for pickups until restrictions on driving them in urban areas are lifted in more cities.

For now, the China Passenger Car Assn. tells Reuters, there is little demand for pickups from “normal” Chinese customers.