Geely only began making cars in 1998. It started exporting some of them five years later. Clearly the company has global aspirations.

Geely isn’t alone in its regard for Aston Martin. The 107-year-old company makes beautifully designed, luxurious and powerful touring coupes, and it has become a cultural icon as the brand of choice for fictitious super-spy James Bond. 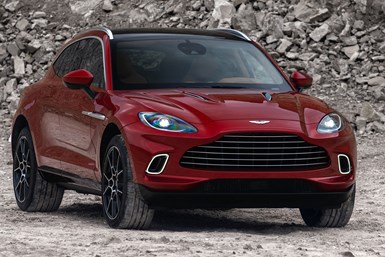 But there’s a dark side. Aston Martin has been in and out of bankruptcy seven times. Its stock price has plunged 80% (to less than $6 per share) since the company went public in October 2018.

Last year Aston Martin’s factory sales to dealers slumped to 5,800 cars, well below the 7,800 it had hoped for. Three days ago the company admitted it is running short of cash.

All this is happening as the company prepares to launch the DBX, its first crossover vehicle. If the $193,000 model is as successful as SUVs introduced by many of Aston Martin’s peers, it will enrich the company enormously.

For Geely, taking a stake in Aston Martin at this juncture would be timely, inexpensive and prestigious. Which is exactly what other would-be investors are thinking.

Aston Martin isn’t saying who its suitors are. But it appears almost certain to attract at least one. The leading contender is Canadian billionaire Lawrence Stroll, who reportedly wants to start by buying 19% of the company.

Stroll also happens to bankroll Aston Martin’s lackluster Formula One racing team, one of whose cars is driven by his son Lance.